Go to: End or EcoFuture Home

In 1992 the novel Ishmael was awarded the Turner Tomorrow Fellowship -- an award for authors whose fiction helps produce solutions to global problems. Ishmael tells the story of a man who sees an advertisement in the Personals section of his local newspaper:

TEACHER seeks pupil. Must have an earnest desire
to save the world. Apply in person.

The man is furious, assuming some fraud placed the ad to prey on idealistic young dreamers. He goes to the interview, driven to prove the "teacher" is really a charlatan. At the interview, the man finds himself alone in an abandoned office with a full grown gorilla who nibbles delicately on a slender branch. "You are the teacher?" he asks incredulously.

"I am the teacher," the gorilla replies telepathically. The gorilla, Ishmael, proves to be a genuine teacher of immense wisdom.

What follows is a journey from the birth of life, through human pre-history, history, and on to a possible future path in which humankind begins living in harmony with a rarely recognized law of nature. The novel transcends mechanical ecology, offering a vision of life-affirming meaning and deep spirituality. Ishmael tells the history of the world in a way that never appeared in any school textbook.

"Is it man's destiny to rule the world? Or is a higher destiny possible for him -- one more wonderful than man has ever imagined for himself?"

Howie Richey has distilled the major themes of Ishmael into a concept summary.

Following are a few sample quotes:

... Ishmael thought for a moment, "Among the people of your culture, which want to destroy the world?"

"Which want to destroy it? As far as I know, no one specifically wants to destroy the world."

"And yet you do destroy it, each of you. Each of you contributes daily to the destruction of the world."

I shrugged, "Frankly, we don't know how."

"You're captives of a civilizational system that more or less compels you to go on destroying the world in order to live."

... "I'm telling you this because the people of your culture are in much the same situation. Like the people of Nazi Germany, they are the captives of a story."

I sat there blinking for a while. "I know of no such story," I told him at last.

"You mean you've never heard of it?"

Ishmael nodded. "That's because there's no need to hear of it. There's no need to name it or discuss it. Every one of you knows it by heart by the time you're six or seven. ...And you hear it incessantly, because every medium of propaganda, every medium of education pours it out incessantly. ...It's like the humming of a distant motor that never stops, it becomes a sound that's no longer heard at all."

"This is very interesting," I told him. "But it's also a little hard to believe."

Ishmael's eyes closed gently in an indulgent smile. "Belief is not required. Once you know this story, you'll hear it everywhere in your culture, and you'll be astonished that the people around you don't hear it as well but merely take it in."

... "First, some vocabulary. Let's have some names so we don't have to go on talking about 'the people of your culture' and 'the people of all other cultures.' I've used various names with various pupils, but I'm going to try a new pair with you. You're familiar with the expression 'Take it or leave it.' Using them in this sense, do the words takers and leavers have any heavy connotation for you?"

"I mean, if I call one group Takers and the other group Leavers, will this sound like I'm setting up one to be good guys and the other to be bad guys?"

"No. They sound pretty neutral to me."

"...I mean that the people of London and Paris and Baghdad and Seoul and Detroit and Buenos Aires and Toronto all know that -- whatever else separates them -- they are united in being civilized and distinct from Stone Age peoples scattered all over the world. ...Would you be more comfortable if we used these terms, civilized and primitive?"

"Yes, I suppose I would be, but only because I'm used to them. Takers and Leavers is fine with me."

"This is the general shape of human history as it's perceived in your culture."

"As you'll come to see, what I'm saying is quite different from this. The Leavers are not chapter one of a story in which the Takers are chapter two."

"I'll say it differently. The Leavers and the Takers are enacting two separate stories, based on entirely different and contradictory premises. This is something we'll be looking at later, so you don't have to understand it right this second."

... "Are you exempt from the laws of aerodynamics?"

"Can you think of any laws at all from which humans are exempt?"

"Let me know if you do. That will be real news."

"But meanwhile, if there does happen to be a law that governs behavior in the community of life in general [would humans be exempt from it?]"

"I don't know. I don't see how a law for turtles or butterflies could be of much relevance to us. I assume that turtles and butterflies follow the law you're talking about."

"That's right, they do. As to relevance, the laws of aerodynamics weren't always relevant to you, were they?"

"When did they become relevant?"

"When you want to fly, the laws governing flight become relevant." 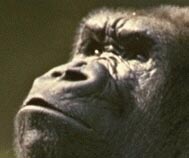 "And when you're on the brink of extinction and want to live for a while longer, the laws governing life might conceivably become relevant."

... "It's hard to believe our own biologists aren't aware of this law."

"In the same way, nothing you discover here about life in the community of life is going to astound anyone, certainly not naturalists or biologists or animal behaviorists. My achievement, if I succeed, will simply be in formulating it as a law."

Created: 16 February 95 by Wayne L. Pendley. Wayne also adapted the images on this page from originals provided by Corel Professional Photos on CD-ROM. Thanks to Stephen Best and Jason Braddy for their Ishmael work, some of which is included here.